True or False: George Washingtonâ€™s teeth were carved from wood.

False. His teeth were actually carved from Hippopotamus ivory and one other very valuable mineral…

Have you ever heard the story of George Washington’s teeth? Well, popular belief has it that they were carved from wood. While this story has enraptured children for generations, it is – alas! – not true. Here’s the true story…

When George Washington was just a young boy, he began to lose his teeth at an alarming rate. Throughout most of his younger years, he suffered severely from poor dental health, and in his lifetime, had two sets of false teeth – or dentures, as they’re more commonly called today – both made for him by the most prestigious dentist of his day, Dr. John Greenwood. Both sets were carved from the finest hippopotamus ivory (which may be where the “wood” myth came from) and gold. Yes, George Washington had ivory and gold teeth. (One set went missing from the Smithsonian around the late 1970’s and was never recovered, possibly due to its gold content.)

Though George Washington’s dentures suited him just fine back in the day, they weren’t all that comfortable. Because of the way the sets were fabricated, the upper and lower gold plates were connected by springs, which pushed the upper and lower plates against the upper and lower ridges of the mouth in order to hold them in place. If you can picture this, then you will know what this meant for the President: He had to actively close his jaws together to make his teeth bite together, and if he so much as relaxed his mouth just a tidbit, his jaw would pop open. Which bodes the question: Could this be why our First President always looked so stern in his photographs? 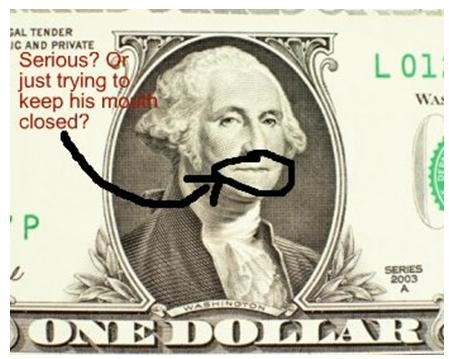 Though George Washington’s dentures did have a few flaws, they succeeded in giving our First President teeth, and were an outstanding improvement on even earlier tooth replacements, which were made with everything from stones to seashells. However, without all the stone and seashell implants, and without George Washington’s eccentric, yet functional, set of dentures, modern implants may not be even as nearly as successful as they are now. History gives us grounds to go off of, examples to learn from and standards by which to measure our most recent successes.

To learn more about our modern tooth replacements, and all the options we’re lucky enough to have now, follow this link:http://www.lakeshorefamilydentist.com/library/108/Implants.html.

Stay tuned for our follow up blog on the history and evolution of dental implants. Thanks for reading!